Australian immigration system is designed to increase population, yet Leave wants it 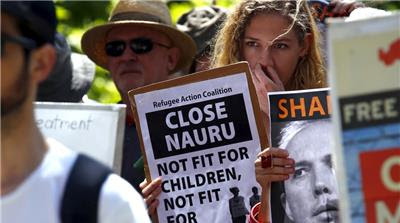 Sam Coates, deputy political editor of the Times, was on the Sunday Politics today, telling us that the Remain campaign hadn’t reckoned on the Leave side gaining traction with their policy of an Australian points based immigration system. Coates counted it as a success for Leave, in what, he said, Remain had thought would be ‘a policy free’ campaign.

Yes, well, the Oz points-based policy has seemed to push sentiment towards Leave during this last week. But right on cue, the Remain camp has started to take Australia’s points-based immigration policy apart. What was published today in the pro-Remain Mail on Sunday – details on that in a moment -- will just be part of the push to discredit the Australian system.

But then, the policy is an easy target. It is another one of those ideas which the Leave side has adopted because they like the sound-bite it makes. ‘Points-based’ sounds good, very non-racial, non-discriminatory, very meritocratic.

Add ‘Australian’ and you’re there, because Australia is one of those countries with which the British are happy to draw parallels. Another one is Canada.

What it means when you garnish a policy with the word Australian (or Canadian) is that the policy is comfortably Anglo-Saxon in style but it isn’t American.
Even, however, if America were to have a similar policy (which in the case of immigration, it hasn’t) nobody in Britain would want to call any policy an ‘American’ system.

Tacking the adjective ‘American’ onto a policy is likely to draw fire because, British critics will say, that aligns the UK with Trump, the NRA, fundamentalist Christianity, a disastrous Middle East policy a wall on the Rio Grande, neo-cons, McDonald’s hamburger cuisine, etc. etc., whatever else the BBC and its friends hate and will attack if you were to describe any policy as ‘American.’

Therefore, when any group of politicians is looking for policies to borrow from abroad that will have an Anglo-Saxon flavour which will appeal to the British, they will choose Australian immigration, Canadian banking, New Zealand farming, Hong Kong financial services, Indian high-tech dynamism, whatever you want from any country from the British imperial past except America.

So this time the comforting garnish for an imported policy is ‘Australian.’

Even though the Australian points-based immigration policy has been, by British measures, a disaster.

This is yet another example of the Leave side embracing a policy which they have been too arrogant or too lazy to research properly. Now they have to face the story in the Mail on Sunday today which runs the (over-heated, but as reporters always say, ‘I don’t write my headlines) triple-deck blast: ‘The Australian Guantanamo: Migration control system proposed for Britain which asylum seekers compare to brutal torture prison’

‘It costs Australia a staggering £200,000 per refugee per year to keep them on remote islands in Papua New Guinea, with detainees offered payouts of £3,500 to give up their claims and return home.’

‘Under the controversial policy, hundreds of migrants, including political dissidents and war refugees, are flown to camps on Manus and Nauru, islands thousands of miles off the Australian coast, where high rates of disease, death and suicide have shocked aid workers.’

‘…The horrendous conditions have persuaded some migrants to give up their claims and accept resettlement payouts to go home, with some returning to war-torn Syria or Iraq.’

‘Those payoffs pale by comparison to the staggering £200,000 per refugee per year the Australian Refugee Council estimates it costs to keep them in the leased Pacific island camps.’

‘By contrast, allowing them to stay in Australia while their claims are determined would cost only £8,500 a year, the council claims.’

Communications officers running the Leave campaign should have realised that Boris Johnson, Michael Gove and the rest pushing the Australian points-based system would have led to such stories. Clearly no one in the party bothered with any research beyond the title of the policy.

This negligence leaves the Leave campaign vulnerable to a follow-up story such as: ‘How much of the spurious £350m on the side of the Leave battle bus is going to go to paying to keep migrants off-shore on (take your pick) the Isle of Wight, the Isle of Man, the Falkland Islands, Diego Garcia?’

It is not like the researchers at Leave had to do a lot of digging to know this Oz idea was a bad one. In December 2014 Migration Watch released an assessment which trashed the policy, and in a way that was a lot less sensational and a lot more full of facts than the Mail on Sunday story:

The report concludes that an Australian points-based system would be unsuitable for the UK: ‘The Australian immigration system is highly regarded because the Australians have achieved effective control of their borders and they can also identify and accurately record those who arrive and depart. Neither depend on their Points Based System (PBS).’

‘The Australian context could hardly be more different. Many Australians believe that they have a strategic need to grow and have the space to do so. Both major parties favour increased legal migration and their PBS is a means to that end. (Public debate is mainly about how to handle asylum seekers arriving by boat.)’

‘Furthermore, net immigration to Australia is proportionately three times higher than ours as the Australian Government pursue their strategy of population growth through immigration.’

‘In the UK, we face very different geographical and political circumstances. This became apparent when the last Labour Government attempted a version of a Points Based System. It led to chaos from which the Home Office have been trying to recover for four years.’

‘One of the main problems was that it almost eliminated the element of human judgement (and was intended to do so). In practice, this turned out to be hopeless as the circumstances of each case are much too varied and complex for a box ticking system to work.’

‘Sure enough, the Australian system turned out, on examination, to be very complex yet it covers only 60% of skilled work migration and 15% of all migrants. It applies only to job seekers as employers have a different route.’

It is bad enough the Leave side won’t do proper research to identify the obvious problems with the Australian points-based system. What is really worrying is that they won’t even bother to do proper Googling.
Posted by M.E. Synon at 05:55